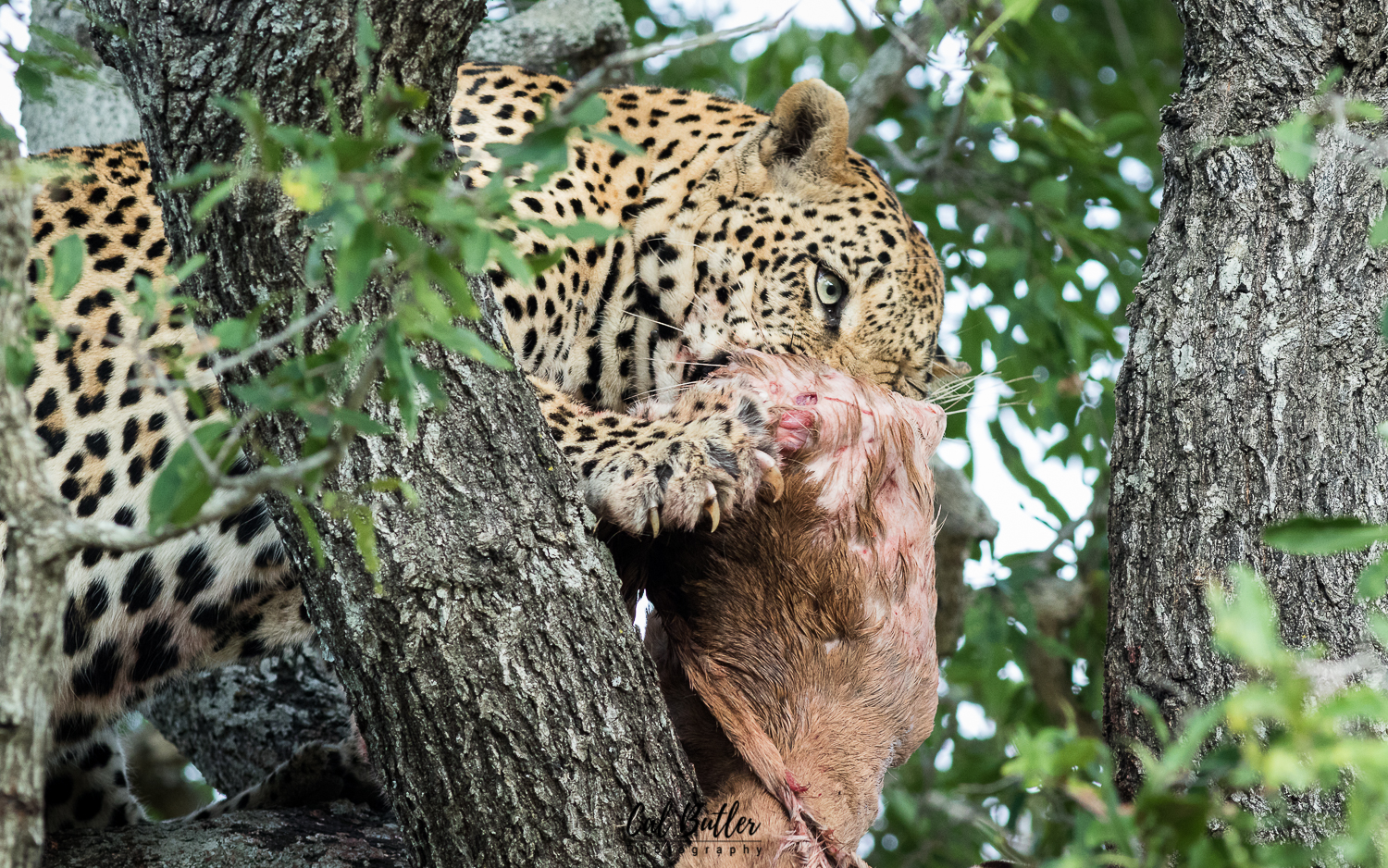 Whenever I cross over the renowned Sand River, I keep my eyes open for signs of one animal in particular. Fresh footprints along the northern sand banks or the distinctive territorial rasps across the Marula tree crests let me know that I am not far off from my search.

I have not had many opportunities to spend time with a male leopard called Euphorbia. He was born towards the end of 2015 and slowly, but surely started taking over the northern territory. Although we are not certain who his father is, some claim it to be Nyelethi. His mother, Hukumuri, looked after him for his first two years until he headed off to greener pastures.

The handful of sightings I have shared with this male have been fleeting glimpses on the ground. I recently had the fortune of spending time with Euphorbia feeding high up in a tree. He casually fed on an impala that fell victim to this stealthy predator during a dark and windy night.

Euphorbia managed to consume about half of his prize by the time I arrived. A young hyena kept circling the base of the tree, waiting patiently for any scrap pieces to fall down. A sighting like this can often be very distracting. There is so much going on that it can be hard deciding which predator to focus on. The interactions from both parties are so interesting to watch.

As if the hyena was not enough to keep an eye on, I heard the unique squawk of a Martial Eagle nearby. Before I even had to figure out which direction the eagle was coming from, I caught a glimpse of its enormous wings. The Martial Eagle is one of the largest eagles we have in South Africa, sporting a dark brown chest, Dalmatian like spotted belly and piercing yellow eyes. It circled the tree twice, but decided to rather move on for the morning.

One thing that always impresses me is witnessing the sheer power that these leopards hold. Euphorbia lifted the entire carcass and in one swift movement flipped it around. Every so often he would lose a small chunk of meat, only to the delight of the patiently waiting hyena below.

It has been a real treat watching this young male take over the northern section of the Sand River. He has had a good couple of run-ins with the dominant male in the area, Ravenscourt. With the absence of an old male leopard called Homelite, Ravenscourt started claiming sections of the north until Euphorbia started standing his ground. Although these two powerhouses are not locking jaws and swinging claws just yet, they most certainly are trying to intimidate one another with intense vocalization from opposite sides of the river.