Whilst thoroughly enjoying the bush life and all the spectacular events that have taken place, there was still one animal that has evaded me each time I head off into the bush. I’ve seen a couple of tracks, heard calls outside my room and even missed sightings by mere seconds.

I recently visited Kruger National Park and entered in at the Phalaborwa gate. It had been raining the morning so I wasn’t all too sure what effect the rain would have on the morning’s sightings. My goal for the morning was to bumble along from Phalaborwa up to Mopane Rest Camp. I spent about 30 minutes driving in the park and I had not seen one animal. Even the birding was off to a slow start.

Soon after that I crossed paths with the first vehicle coming down from the opposite direction. We both stopped and had a quick chat. I asked if they had seen anything close by and their faces lit up. This immediately got me excited.

The driver whipped out her phone and showed me pic of an elegant leopard sitting on top of a road sign not too far away. She said that this leopard was so relaxed and basically just posing for photos. I thanked her for the heads up and proceeded to the waterhole where the cat was seen. I approached with caution as this was going to be my long awaited, first leopard sighting. I was not going to spook it off and miss this sighting.

I neared the area and scanned it thoroughly. Just my luck. No sign of a cat at the road sign. Nothing in the trees. Nothing underneath or behind the fallen trees. No movement at the two waterholes. No paw prints in the morning sand. Obviously this leopard was going to elude me.

Very despondent, I left the area and proceeded with my journey. I looked at the map and noticed a few more waterholes dotted along a river. I eventually arrived at the Nandzana waterhole turnoff and wondered if I should make a turn there. About 100 meters further I saw a car positioned on the bridge overlooking the riverbed. A camera was sticking out from the window. This assured me that something interesting was lurking in the riverbed. I skipped the waterhole turnoff and approached the vehicle. I kindly asked what they were viewing. “Leopard” they responded.

I couldn’t believe it. “Why does everyone get to see leopards but me” I thought. They told me it was in the dry river bed, but moved up the bank to behind a termite mound. I reversed to get a better look. I couldn’t see anything. Then I thought, “The leopard went to the waterhole”.

I reversed yet again and made my way to the waterhole along a gravel road. As I turned the last corner leading to the water, the most beautiful creature lay waiting to greet me.

In the open, at the edge of the waterhole, a leopard was relaxing in all her glory. There was only one more vehicle already enjoying the sighting. I could hardly contain my excitement. I managed to get one picture and then she got up and walked straight towards me as if to come greet me. The feline moved past our cars and paused in the road as if she was showing off for me. 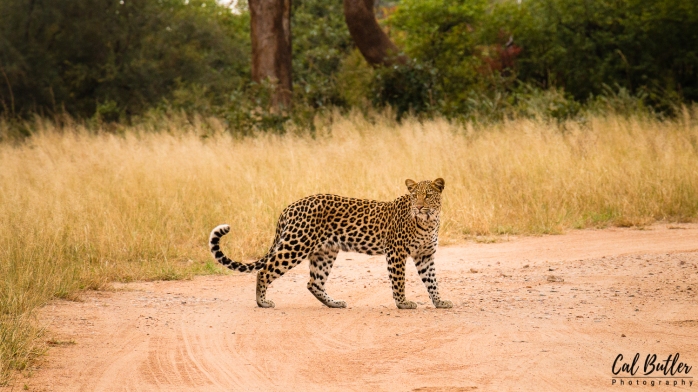 If there was ever a leopard that I wanted to see it was without a doubt this one. She was relatively small, very feminine and just an absolute stunner. Apparently she had been wandering around Nandzana waterhole that whole week. It was as if she was waiting just for me to arrive.

After moving off the road she made her way to a grassy patch. A few more cars had arrived at the sighting by this time. The leopard decided that her pageant was over. She got up and started moving off. Before disappearing into the thicket she stopped and looked back as if to say goodbye one last time. 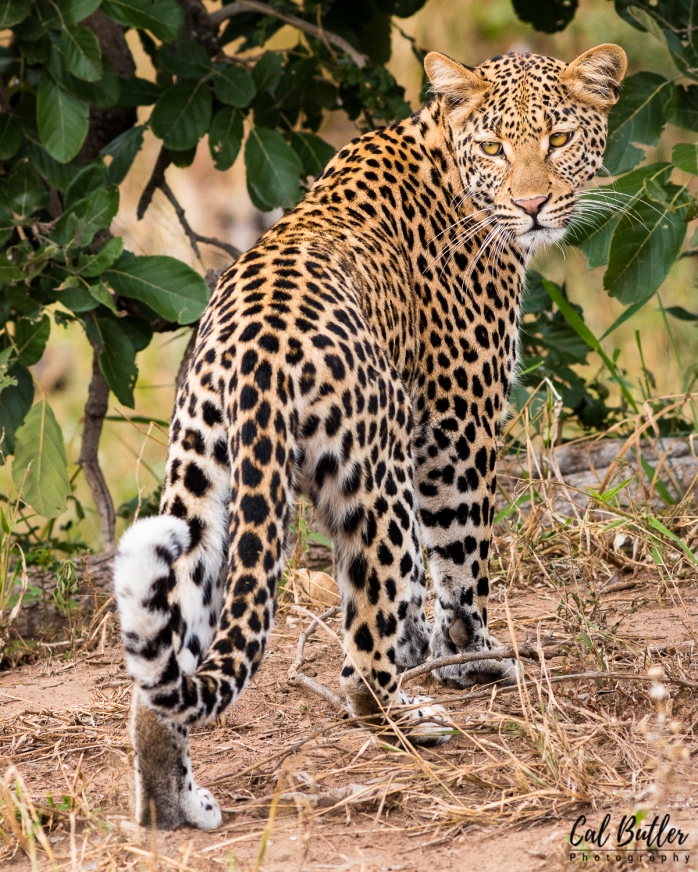 ← The Separation
An easy meal →